When, Exactly, Did Politics Become a Tech Story? 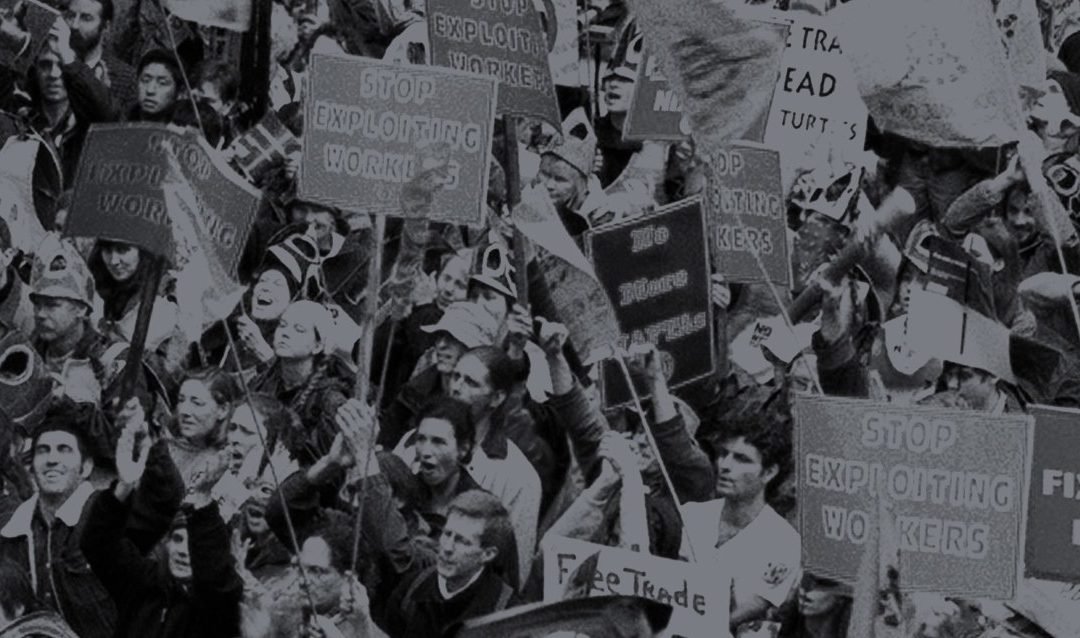 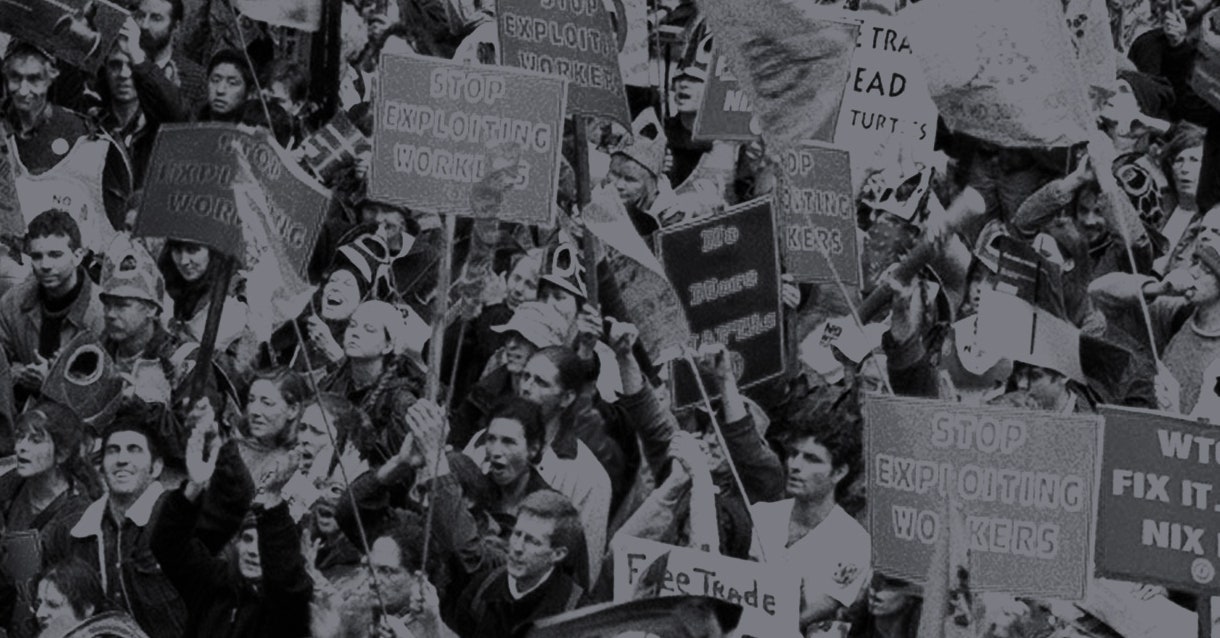 For WIRED’s October issue, David Karpf read every issue of the magazine, in chronological order. He’ll be writing a series about the patterns and insights he found in 25 years of stories about the future.

When politics professors like myself tell the story of the internet, there are a few touchstone events. The biggest is the Battle of Seattle, the vibrant, vocal antiglobalization protest convened at the city’s convention center in 1999. It was a bit of a shock, reading through the WIRED archive, to realize that the magazine never mentioned these massive protests.

WIRED, like most of the tech industry, had a selective view of politics: Economic globalization and digital networking were interlocking forces for good. It reveled in the potential of both, and shrugged off the critics.

So when, a dozen years before Occupy Wall Street, the antiglobalization movement used digital tools to organize an enormous protest march against a World Trade Organization meeting in Seattle, the event didn’t seem like a tech story. Marchers effectively shut down the city, leaving officials surprised and unprepared for the scale of political resistance they faced. The action launched a massive movement that included IndyMedia, an alternative network that challenged the mainstream media, back when blogging was still called “web logging.” For two years, the antiglobalization movement was practically synonymous with digital activism.

Present-day WIRED would have covered these protests. But ’90s WIRED was completely silent on the topic. The reason why is a good reminder that, as the digital revolution becomes a story of the present rather than the future, technology writing has undergone a seismic reinvention—and emerged with a duty to operate as a guide rather than a prophet to this confusing time.

It’s easy to forget, but the internet enthusiasm of the 1990s came alongside a second revolution—the fall of communism and the rise of economic globalization. The Cold War was finally over and the world was becoming networked into a single global marketplace. The internet seemed destined to become the critical infrastructure for making this collective globalization a reality. WIRED spent the late ’90s interviewing “prophets of boom” who boasted about the market’s unstoppable upward trajectory. From this perspective, the antiglobalization movement wasn’t the future of politics, it was a bunch of noisy luddites fighting against the new era of promise and prosperity.

Another surprising absence: The magazine managed to ignore MoveOn.org for six years. MoveOn began as a giant digital petition, calling on Congress to “censure Bill Clinton and move on” from the Lewinsky scandal in 1998. MoveOn later played a major role in organizing anti–Iraq War protest events. WIRED ignored those massive protests too.

The irony of this oversight is that MoveOn was cofounded by two successful technologists, Wes Boyd and Joan Blades. Boyd and Blades had run Berkeley Systems for a decade, and were responsible for iconic ’90s tech memorabilia like the “flying toasters” screensaver and the digital trivia game You Don’t Know Jack. They sold their company in 1997 and founded MoveOn a year later.

Berkeley Systems had been a regular WIRED advertiser, and the very first issue of WIRED featured a brief review of the “neo-nerd chic” Flying Toaster necktie, on sale from Berkeley Systems for $17.95. MoveOn wasn’t just some digital petition website. MoveOn was started by technologists looped into the WIRED scene who were pioneering a new style of digital political activism.

That’s not to say early WIRED never covered the future of politics. Yet stories adhered pretty closely to two main themes: speculation on how networked computing might someday change politics and criticism of how bad legislation was on the verge of ruining the internet. Today’s government was a problem to be avoided or solved; tomorrow’s government would be radically transformed or rendered irrelevant.

You can see both of these themes on display in a pair of WIRED articles from 1994 and 1996. The first, “The Merry Pranksters Go to Washington,” by Joshua Quittner, describes the Electronic Frontier Foundation in a moment of ascendant glory. Mitch Kapor, EFF’s cofounder and chairman, was personally advising vice president Al Gore on the future of information infrastructure policy. At EFF board meetings, there was idle talk about “reclaiming Washington,” “putting the science back into political science,” and building a Net political party that would make centralized government obsolete.

As Quittner puts it, “How hard could it be to hack government?”

Pretty hard, it turns out. Two years later, in 1996, Rogier Van Bakiel writes about the “stunning repudiation” of the EFF in “How Good People Helped Make a Bad Law.” The EFF had set up a DC office, offering their expertise to help Congress and the Clinton administration work out the details of the 1994 Digital Telephony Bill. The resulting bill was viewed as a betrayal by many cyber-libertarians, who were furious that the EFF had provided cover for intrusive government regulation. The EFF shut down its DC office.

As Van Bakiel writes, “To the casual observer, it look[ed] like Washington tarred and feathered the EFF, drove it right out of town, laughing, with this message: We play this game better than you.” Technologists had tried to hack Washington. They were denied root access, so to speak.

After the twin shocks of the dotcom bust and the September 11 attacks, WIRED’s approach to political coverage changed. By 2004, Linux and the Open Source software community provided the narrative building blocks for what Tim O’Reilly would eventually call “Web 2.0.” The internet wasn’t an information superhighway anymore. It was a community, filled with people who were collaborating in new and exciting ways.

These were the years when I started reading WIRED. I was a doctoral student in political science, trying to make sense of the Howard Dean campaign. Gary Wolf’s 2004 article “How the Internet Invented Howard Dean” made the compelling case that Dean’s meteoric rise was rooted in the promise and possibility of online communities. Later that year, WIRED finally gave MoveOn its due, with Wolf’s article “Weapons of Mass Mobilization.” Something new was clearly happening with the rise of the blogosphere, social networking sites like Myspace, and the little encyclopedia that could, Wikipedia. Internet theorists (and WIRED contributors) like Clay Shirky and David Weinberger were brought in to advise the Dean campaign. It seemed like the only way to understand how politics was changing was to keep up with WIRED’s trends.

In retrospect, the biggest change at this time seems to be that the digital revolution had come unmoored from the philosophical commitment to globalization. The future of politics started to look like partisan participatory communities fighting for political reform while reshaping old political parties. “Netroots” bloggers like Markos Moulitsas were natural protagonists, and the magazine’s coverage bent to reflect this change.

Still, throughout the Bush and Obama years, politics mostly remains somebody else’s problem. There’s little contemporaneous coverage of the Arab Spring, the Tea Party movement, Occupy Wall Street, or Gamergate. (Bill Wasik’s December 2011 cover story, “#Riot” is one noteworthy exception.) These were seminal moments that changed how we thought about the intersection of politics and the digital revolution. At the time, it seemed like someone else’s story.

It’s hard to pinpoint precisely when Web 2.0 ended, but it died with a whimper, not a bang. At some point, peer participation was replaced by the platform era, where a few quasi-monopolistic internet giants have astonishing control over online attention.

Suddenly, technologists started taking the problems of governance and politics more seriously. One noteworthy moment came in editor in chief Scott Dadich’s November 2015 magazine column. “From Silicon Valley’s stubborn diversity problem to Facebook COO Sheryl Sandberg’s call to ‘lean in’ to the digitally enabled nationwide rise of Black Lives Matter, the WIRED world is squarely at the heart of today’s conversation about race and gender.”

This expanded focus has resulted in a higher volume of political coverage, along with a set of stories that are both technically deeper and more critical. Garrett Graff’s June 2016 article covering Civis Analytics provides a thorough analysis of how digital media is changing political polling. Issie Lapowski has been at the forefront of reporting on Cambridge Analytica. From the December 2016 “Frontiers” issue, coedited by Barack Obama, to the September 2017 issue on “The Great Tech Panic of 2017” and the February 2018 issue on the “(Democracy-Poisoning) Golden Age of Free Speech,” the future of politics has become a central object of analysis for the magazine.

There are, I imagine, several reasons political coverage has become important to the magazine. The first, to be blunt, is that politics has become inescapable in post-2016 America. You can’t write a story about Facebook, Twitter, or Google without writing a story about politics. Covering the digital revolution in the Trump era inevitably entails covering Trump.

But now that digital networks are baked into everything, it’s much harder to envision technology writing as a siloed, futurist sport designed to envision the new “digital nation” that is inevitably just around the corner. It’s harder to claim that technology will disrupt inequality and radically reshape government when the digital revolution has a 25-year track record—and it’s not all positive. It’s impossible to believe that we’re on the cusp of a “more rational, less dogmatic approach to politics,” as WIRED’s resident cultural critic Jon Katz wrote in 1997.

Early WIRED could dismiss the broad expanse of politics because its writers were focused on imagining the future. Today, the digital revolution is upon us, so WIRED writers have a larger task: helping readers understand what is happening all around.