Today’s News Crises Are Different, But Will Never Be Entirely New 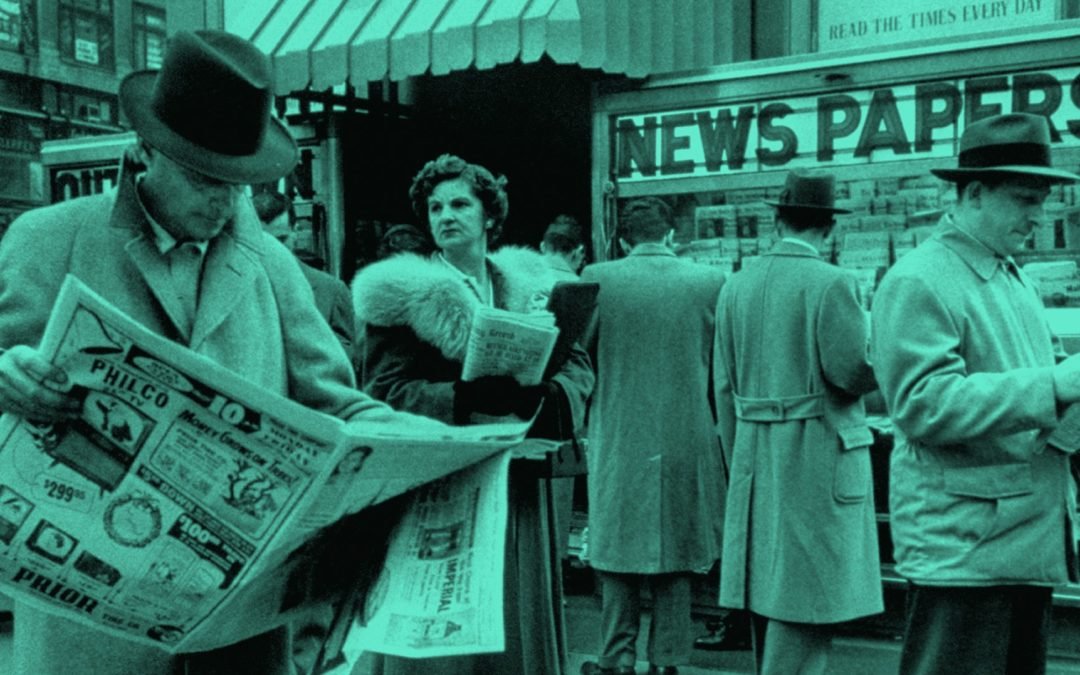 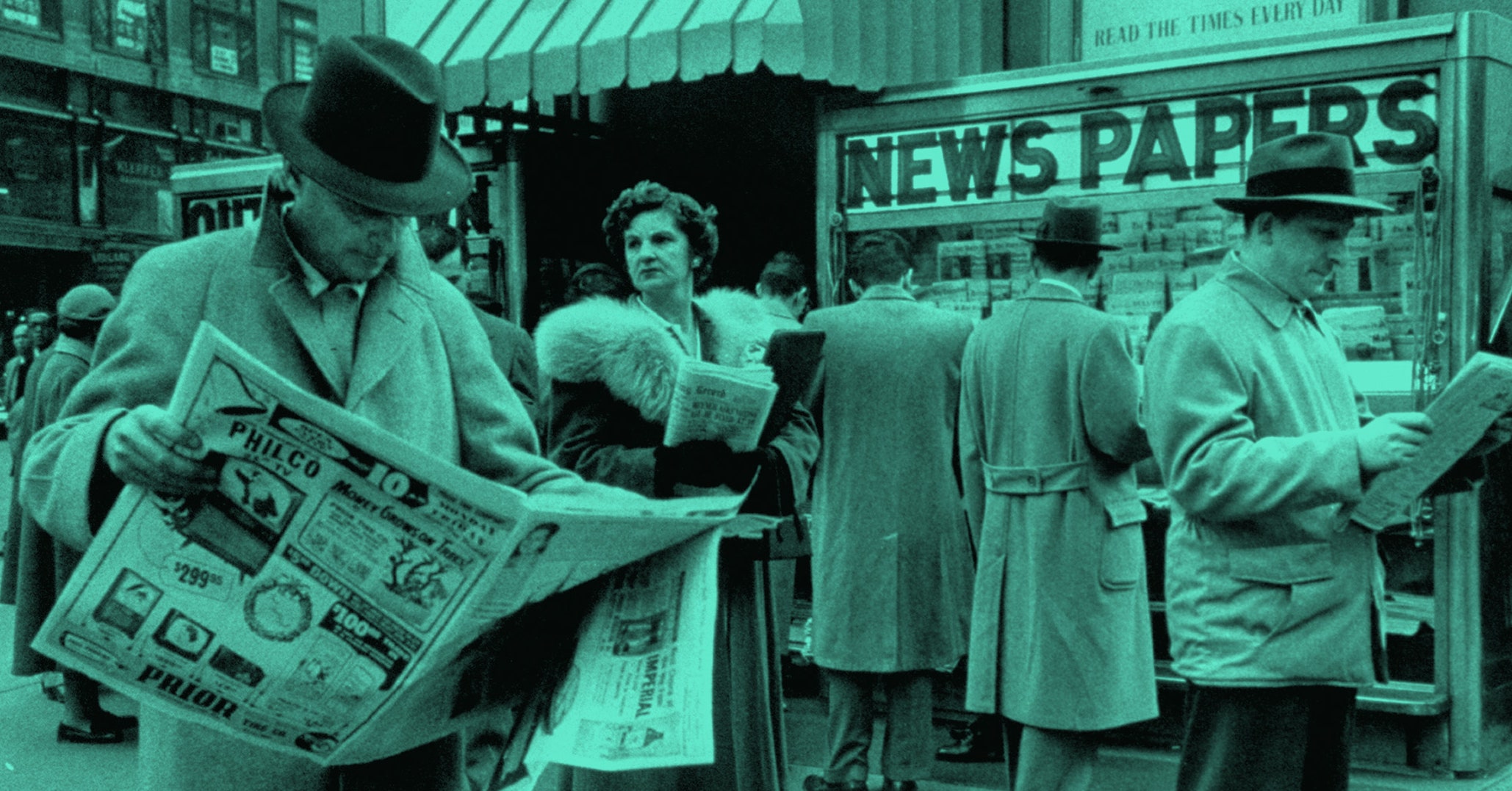 For WIRED’s October issue, David Karpf read every issue of the magazine, in chronological order. He’ll be writing more about the patterns and insights he found in 25 years of stories about what’s coming.

Ideas about the future endure through the years, like a fixed horizon of expectations.

Nowhere is that clearer than in WIRED’s journalism about the future of journalism. Since the magazine was launched, journalism has always appeared on the verge of crisis. The media have always been untrustworthy, frivolous, and immune to change. But the fact that the press cycles through these same struggles holds some crucial lessons for those who care to listen. Namely, that journalism always toggles a tricky line between the business of storytelling and that of information. And readers (and their demands) have less to do with the end result than one might imagine.

Let’s travel back to the beginning, so you can see what I mean.

In the April 1993 issue of WIRED, Michael Crichton wrote an article titled “Mediasaurus.” Mediasaurus was the first entry in a genre that we have come to know very well: dire predictions about the digital future of the news media. “To my mind,” he wrote, “it is likely that what we now understand as the mass media will be gone within 10 years. Vanished, without a trace.”

It’s worth acknowledging just how early 1993 is. The World Wide Web barely exists. The Mosaic web browser won’t be covered by WIRED for another year and a half. The so-called ‘Net is still a collection of BBS message boards and Gopher protocols. Crichton isn’t crowning Slate or the blogosphere or YouTube or podcasting as the future of news. Those elements of the modern internet weren’t even a hazy fantasy in 1993.

Indeed, the bulk of Crichton’s much-too-early warning could have been written today. “We all know statistics about the decline in newspaper readers and network television viewers,” he writes. “The polls show increasingly negative public attitudes toward the press—and with good reason. … Large segments of the American population think the media is attentive to trivia, and indifferent to what really matters.”

The media’s crisis of public trust is recognizable, but Crichton’s diagnosis of the mass media’s vulnerability feels particularly familiar. “The media are an industry, and their product is information.” As readers pay for information, Crichton argued, they would begin to want better information. For a model of this high-quality, objective digital future, Crichton held up C-Span. Eventually, he hoped, the ‘Net might bring an end to “this era of polarized, junk-food journalism.”

Say what you will about the state of today’s news media, but it is hard to argue that it has become more objective, less polarized, or higher quality than in 1993. Yet that’s the direction we thought things were going in the web’s earliest days, before Netscape, GeoCities, and webzines (let alone clickbait, InfoWars, and troll factories).

The internet of the 1990s offered us both C-Span and soap operas. We chose the soap operas.

As more people purchased dialup modems and logged on to the “information superhighway,” the central problem with Crichton’s reasoning began to come into focus. Crichton believed the mass media was in the information business, but the reality is that the media is in the business of telling compelling stories—stories are what we demand, stories are what we read, stories are what we share. As the internet introduced more granular analytics, that demand for engaging stories only became more obvious. The internet of the 1990s offered us both C-Span and soap operas. We chose the soap operas.

‘News You Can Abuse’

It wouldn’t take long for the dream of an internet of facts and high-quality information to be replaced by an internet of entertaining conspiracy theories. Tom Dowe’s “News You Can Abuse,” published in 1997, grapples with the first iteration of online fake news, surrounding (this might sound familiar) a presidential campaign. “The Net is opening up new terrain in our collective consciousness, between old-fashioned ‘news’ and what used to be called the grapevine—rumor, gossip, word of mouth. Call it paranews—information that looks and sounds like news, that might even be news. Or a carelessly crafted half-truth.”

Dowe’s fake news problem is 20 years early: Instead of fake stories about Hillary Clinton, he’s documenting fake stories about Bill Clinton. But if we compare Dowe’s 1997 story to Sumanth Subramanian’s March 2017 article on the Macedonian fake news factories, the differences start to stand out. In 1996, the digital presidential campaign was still just brochureware. You could find clickable conspiracy theories online, but you had to be looking for them. The sheer scale of services like Facebook and Google were unfathomable. Any viral spread would happen through email forwarding chains. The fake news problem on today’s internet may not be new, but it is different.

Then, of course, there’s the money. By the time Subramanian met with the Macedonian teens, fake news was a business, with infrastructure to support it. Facebook advertising and organic sharing could drive people to fake websites; Google ads served to those visitors make business lucrative. In the ’90s, fake news was a hobby; today it’s a career.

‘How Can I Sex Up This Blog Business?’

Now let’s jump ahead to 2004. During the lean years following the dotcom crash, WIRED stops discussing the future of news. It wasn’t until the emergence of the blogosphere that we started to think about journalism again.

Blogging or “web-logging” began as a form of hobbyist self-expression: Blogs were unfiltered, conversational, and genuine. They weren’t a natural media disruptor. But by 2004, blogging was gaining steam (and gaining investors) as a new form of online publishing. That year, Steven Levy profiled Nick Denton, the founder of a new network of websites called Gawker, in a piece titled “How Can I Sex Up This Blog Business?” With “a squad of talented workaholic misfits,” Levy wrote, Denton’s websites were beginning not just to attract an audience and advertisers, but to unmoor the industry’s chain of command.

“Forget about someone’s résumé or how they present themselves at a party,” Denton told Levy, “Can they blog or not? The blog doesn’t lie.”

This grown-up blogosphere isn’t what Crichton initially imagined. Gawker (RIP), found success by building a better tabloid, imbuing information with flash and personality. Digital journalism was beginning to materialize, and looked nothing like C-SPAN.

By 2009, the vicissitudes of digital advertising had become apparent, and the model that Denton helped pioneer had taken an unexpected turn. Daniel Roth’s “The Answer Factory” paints a stark picture of the “fast, disposable, and profitable as hell media model” that was replacing newsrooms with clickbait factories.

Demand Media, as described by Roth, is the polar opposite of the digital future of news that Crichton once imagined. The future of news in 2009 is an assembly line of algorithmically selected stories, manufactured by clickworkers for pennies on the dollar, resulting in just enough information to to employ cheap search-engine optimization tricks. News outlets everywhere laid off their reporters.

The future of news in 2009 is an assembly line of algorithmically selected stories, manufactured by clickworkers for pennies on the dollar.

That future was a genuine threat. Demand Media seemed to have cracked the secret code for making money in the digital ad economy. As newsrooms across the country shed journalists or shut down entirely, Demand Media just kept pushing out more content. When the company went public in 2011, it reached a higher valuation than The New York Times. But the company’s meteoric success proved fleeting. Google fiddled with its search algorithm, punishing content farms in the process. Demand Media never recovered.

Reading Roth’s article alongside Subramanian’s piece on the Macedonian fake news factories provides a nice reminder that we have been here before. The economic logic of the Macedonian fake new factories circa 2016 is strikingly similar to the economic logic of Demand Media circa 2009. The major difference is that Demand Media was optimized for the (search engine-dominated) digital advertising economy of 2009, and the Macedonian sites were optimized for the (social sharing-dominated) digital advertising economy of 2016. In both cases, the platforms themselves—Google and Facebook—were eventually able to tamp down on the problem by adjusting their algorithms to reduce the economic incentives for junk news and outright deception.

It puts the doom and gloom of the current era in perspective. These excesses and manipulations may appear to be a permanent fixture of social media. But platforms can, when they choose to, respond to pressure by tinkering with their algorithms. Algorithms have given birth to unwieldy social forces, but if you live by the algorithm, you may also die by the algorithm.

Keeping Up with the Times

The February 2017 WIRED cover story brings us full circle, with a feature package on “The News in Crisis,” and a deeply reported story by Gabe Snyder on The New York Times. Crichton’s prediction of the Times’ demise was greatly exaggerated, but many of our present challenges look a lot like the problems of the past two decades.

Snyder documents the Times’ experiments in building a paywall and a set of digital products that can support serious, high-quality storytelling while also producing enough revenue to keep the lights on. “At stake isn’t just the future of a very old newspaper” Snyder writes. “It’s the still unresolved question of whether high-impact, high-cost journalism can thrive in a radically changing landscape.”

In 1993, Crichton thought that people would pay for quality information. In 2007, Howe reported that media consultants had accepted that no one would pay for news online. Today, we know that some people will pay for online news, and the question is how to attract enough of them. The Times paywall is noteworthy because it has worked.

Through 25 years of paranews, fake news, advertising disruption, and clickbait headlines, the Times hasn’t gone away. It has struggled and adapted. It has experimented and occasionally failed. The looming news crisis still looms, but the problems have morphed and been redefined along the way.

Our current concerns have a deep pedigree. The news has always had a trust problem, a substance problem, an objectivity problem.

The news, it seems, has always been in crisis. And as long as there has been a web, the internet has appeared to be both cause and solution to most of the media’s problems. Reading through this journalism through line, what becomes clear is that our current concerns have a deep pedigree. The news has always had a trust problem, a substance problem, an objectivity problem. The demand for unbiased information has always been outpaced by the demand for exciting stories. The promise of disrupting the old news with digital news has always been more modest than expected.

That’s not to say journalists of today don’t face unique challenges. No previous president has declared journalists the enemy of the people, for one thing. But it does mean that the future of journalism won’t ever be quite what we fear. Today’s news crises are real, and they are different from yesterday’s crises, but they are not, and will never be, entirely new.